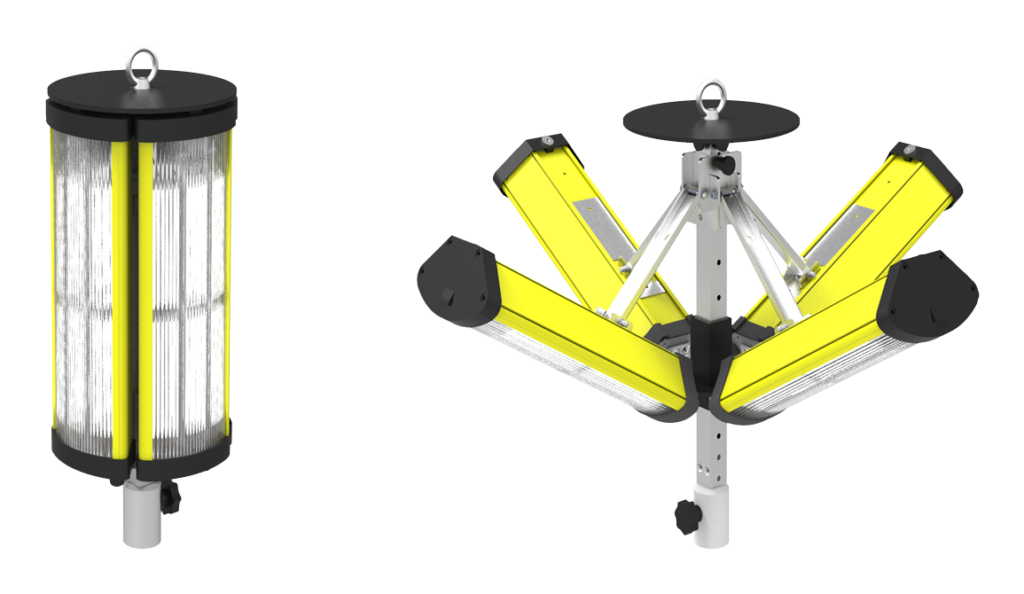 Flexible light all around efficient – the new ALDEBARAN® 360 GRAD FLEX-C 2.0 SERIES offers something more from everything: more light, more flexibility, more safety. The quantum leap in the field of high-performance large-area luminaires initiated by the ALDEBARAN® 360 GRAD FLEX SERIES is now systematically continued with the new 2.0 models.

The patented adjustment system allows the beam angle of the ultra-bright LED light to be efficiently focused on the work area, thus minimizing the use of stray light with minimal energy consumption – the light reaches where it is needed.

Thanks to the new, integrated anti-rotation protection, suspended operation is also possible without special accessories. The luminaire segments can be switched in pairs (180° / 360°) via the control box.
The latest high-performance LEDs generate a gigantic luminous flux of up to 145,000 lumens* – this means up to 15,000 m², depending on the light spot height.**
The light intensity is steplessly dimmable. Optionally, wireless control via app is possible.***

For the first time, the SETO “CONNECT plug system” is installed in the luminaires of the ALDEBARAN® 360 GRAD FLEX-C SERIES 2.0.****
Thus equipped, the replacement of the supply line succeeds in a flash. Screw-on quick-release fasteners allow replacement even without specialist personnel.

One person succeeds in assembling and disassembling the luminaire thanks to the integrated receptacle for the common DIN pin in a matter of seconds.

*REAL lumens, depending on model
**Values ​​for 960 variant
***Optional SETO REMOTE technology
****Not available for Basic versions
*****Depending on model, compared to conventional light